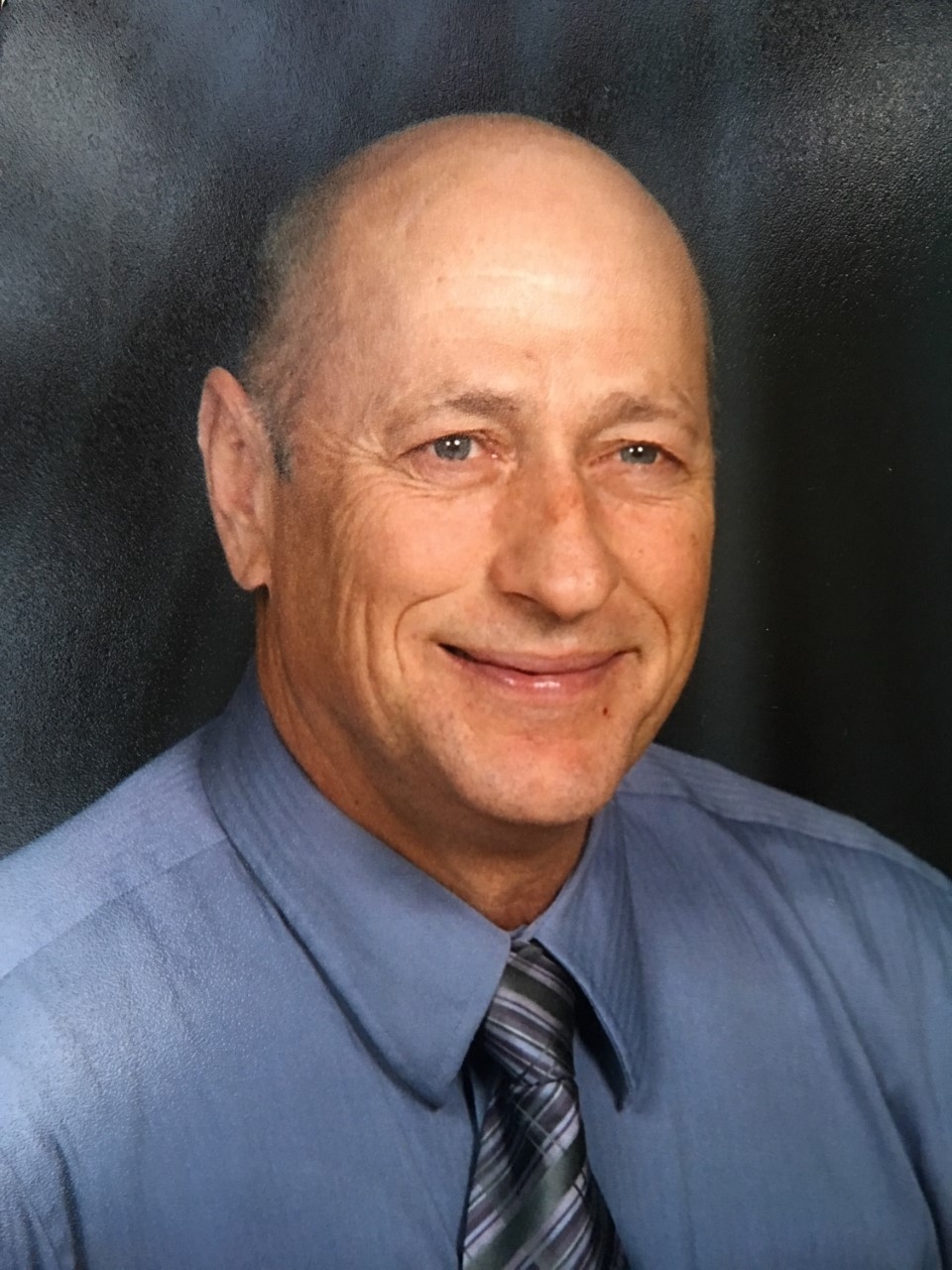 Ronald Eugene Houghton, 68, died on June 3, 2019 at his home in Lee’s Summit Missouri. Ron was born February 21, 1951 in Gallatin, Missouri and grew up on his family’s farm; small town life and a close community that knew him and his family well. He had an incredible love of music and poetry; he even wrote his own music and is a published author. His creative and loving heart gave him the ability to make all of his many friends feel like family; and he had a big family of friends. He was full of life and celebrated life with his wife of 15 years, Judy Houghton, exploring the world on cruise ships and other vacations.
He is survived by his sister and her husband Martha Kay and Larry Allen. He had three sons and two daughters with their spouses and children. His son, Michael Houghton and spouse Shawn with their three children, Ron’s grandchildren Meagan, Jayden and Allison Houghton. His other son David Houghton and his spouse Julie with their two children, Ron’s grandchildren Jacob Westlin and Brittain Houghton. His third son Joshua Houghton and his spouse Shannon Hattabaugh and their son, Ron’s grandson Mason Houghton. His daughter Clara Tanner and her spouse Jeff and their son, Ron’s grandson Mark Tanner; his second daughter Jeanie Sullivan. From his wife he has two step children and their spouse and children. His step daughter Melissa Doyle and her spouse Brian with their two children, Alexander and Zachary Doyle; his step son Christopher Partin.
He is proceeded in death by his mother and father, Lois and William Houghton.
Visitation will be held at 10 a.m. with services to follow at 11 a.m. Friday June, 7th, at the Langsford Funeral Home. Aaron Allen will officiate. Burial will be in the Lee’s Summit Historical Cemetery and serving as pallbearers will be Mike Perez, Jim Hathcock, Brittain Houghton, Mark Tanner, Brian Doyle and Chris Partin.

My thoughts and prayers are with Judy, Melissa, Chris and extended family. May you find some peace and comfort in the days and weeks to come. Wish I was there to give you all a big hug! Susan Files

My dear Judy and family,
My heart is breaking for all of you. You’ve become such good friends over the years. Please know that I am praying that the God of all Comfort will be very real to you all during these very difficult days.

Judy,
I am so sorry for your loss. You know I love you and Ron, you are two of my oldest friends. If you need anything at all, just call me, please. If you need to talk, or just someone to hug you..I am here for you always! We are family..heck..we go clear back to 4th grade…call me, I will listen.
Love you sister,
Cheryl

Words can never express the love and kindness I’ve felt from a warm and gentle Soul. Ron was a genuine, caring Man. God had a reason for our paths and yours to meet, I’m Thankful he chose me to meet this Wonderful Man and his Lovely and very Kind Wife. Judy, may God’s Angels continue to Surround you and your love ones today and all the Tomorrow’s to come. I love you both. Love never dies. I’m lifting all of you up in Prayer. God Bless You, Love you. Annie

Judy,
Our thoughts and prayers are with you and your family in this time of loss. Ron was a wonderful guy and we are so glad that we were lucky to meet him. Please let us know if we can do anything for you, do not hesitate to call.
We love both of you.

Sorry for loss. Love u guys. Will miss Ron
I used to talk to him on my break at my old job . When he did training for truck driving school. And singing karoake . Love u booth

I’m so sorry for this loss. Prayers for his many friends and families. I only knew him through Karokee but I loved watching him and Judy sing. I loved watching them look at each other with pure love. Sincerely,DeAnn

I can’t express the sorrow & hurt I feel & how Judy & all of Rons children & family must feel. I met Ron & Judy while working for ESS at The Sandbar Karaoke night. & what unfolded after that was a friendship & blanket of Love that fell over us all. We were all a little karaoke family & how I miss that so much!!! Thank you for all the memories. ❤

My thoughts are with the family and especially Judy. I will miss you my friend “I can call you Betty, and Betty when you call me you can call me Al”

.. I’ve known you and Ron for almost 14years now. You and Ron are very special to me I will miss him with all my heart I’m here if you ever need me I’m just a phone call away. Love you so much and will keep you in my prayers

Ron was a amazing man love to hear him sing love to her his jokes when I first met both it was like brothery and sister love. He would always sing a song for me called Susan I will always keep that song close to my heart love you Brother Ron Till we meet again.Big Hugs

Judy, words cannot express my sorrow for your loss. I am praying for you and your entire family. If there is anything I can do to help you through this, I would be honored. Much love to you

Our thoughts and prayers are with all his family. My heart breaks for you, though no words will heal your broken heart, one day you will heal. We met Ron over 27 years ago and each time I would see him he was always kind and soft spoken. Our condolence to his wife and family and his sons David and Mike grandson Britain . From Mike and Esther Montez and Letty of Iowa

Ron was a good guy. He will be missed very much.

You will be missed

Dear Martha, I am so heart sick for you…praying for you and family. Sally

My Heart is Totally Broke , Ron Was a Very Kind Man and My Friend , Judy Love You and Ron So Much , Ron will Always Be In My Heart, So Sorry Judy You Are Going Though This , Hugs and Love My K Friend ???

David and family, My heart goes out to you during this time of sorrow. May God give you strength throw this difficult time of mourning.

Im very sorry for ur loss. Much love to u at this sad time. Hope u will be ok

I know that in the last couple of years we’ve only seen each other a few times and usually at karaoke. When we first met at karaoke with KC he’d tease Ron and I saying it was the “Ron and Ronnie Show”. I think Ron got a kick out of it as much as I did. And even though our lives moved in different directions, Wayne and I will never forget our get togethers at your home and how we felt like family. It’s not going to be the same seeing you Judy knowing that your love is not with you. Ron may not be with us all physically but he will ALWAYS be in our hearts. We love you Judy and our hearts are broken for you and all of Rons family. We are here if you need anything. God bless you and heal your pain.

Michael, David, Josh, and Clara-Sorry for the loss of your father. Prayers for your comfort and strength in the days to come.

We are so incredibly sorry for your loss. Your family is like our own. Our hearts go out to each of you during these difficult times. If there is anything you need from us, we are here for you. Ron will be missed by many. Take comfort in knowing he is no longer suffering and will always be with you in Spirit with a loving heart. ❤
Remember that I’ll always be in love with you
Treasure these few words ’til we’re together
Keep all my love forever
P.S. I love you…..
Lennon and McCartney

Judy, My heart breaks for you. I cannot find words to express my deepest condolences. You and all of Ron’s family are in my prayers.

My condolences and prayers are with you all. Ron always talked to me any time I saw him at karaoke. His passion for life and those surrounding him will be missed. He lived a great life.

Bro you will definitely be missed. You and Sister Judy will always be close to my heart. I love you both so much. Until we meet again God bless you.