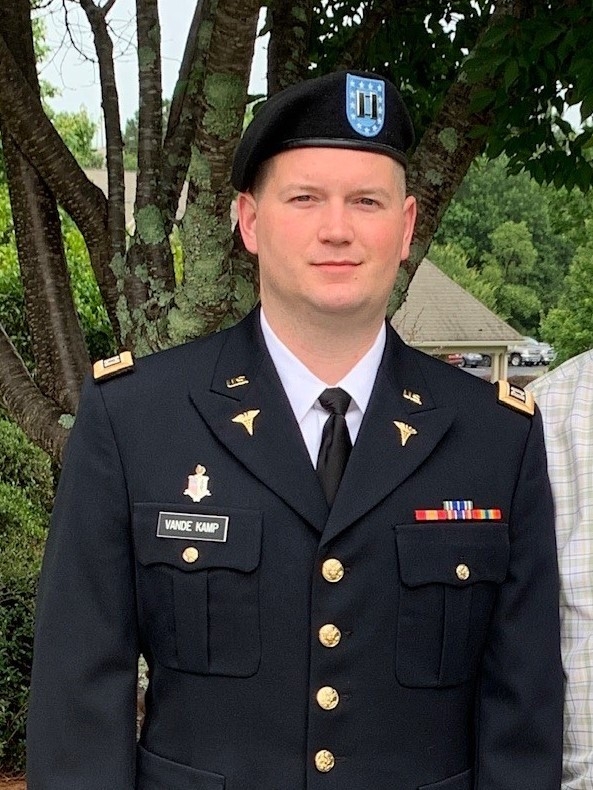 Captain Seth Vande Kamp passed away in a tragic accident while serving as a physician with the United States Army on deployment in the Sinai Peninsula of Egypt. Born in Blue Springs and raised in Lee’s Summit, Missouri, Seth graduated from Blue Ridge Christian School in 2007 and went on to attend Dordt College in Sioux Center, Iowa. After graduating from Dordt in 2011, Seth went to AT Still University’s Kirksville College of Osteopathic Medicine, which he graduated from in 2017. Seth was commissioned into the Army when he started medical school, and he completed his residency at Martin Army Community Hospital in Fort Benning, Georgia in June of 2020. He was a board-certified physician in family medicine, and the assignment to Egypt was Seth’s first overseas posting.

Seth had an adventurous and generous heart, and he made friends wherever he went. He shared his love for long guns and good whisky with many during travels that took him from Hawaii to the Netherlands, from Alaska to Nicaragua and beyond. Seth is survived by his parents, Kevin and Val, sister, Erica (Donald) Roth, brother Ryan (Michal), five nieces and nephews, grandparents, and many aunts, uncles, cousins, colleagues and friends who will all miss him dearly. “I urge you to live a life worthy of the calling you received. Be completely humble and gentle; be patient, bearing with one another in love.” (Ephesians 4:1-2)

You are an amazing human and your spirit will live on thru everyone who knew you Seth. You are so deeply missed.

Prayers for those he left behind in honor of his service.