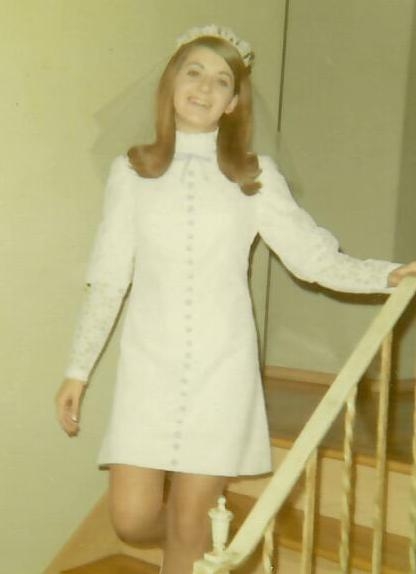 She was preceded in death by her Father Charles L. Johnson, her brother Michael Johnson.

As anyone who came over during the holiday saw, she had a special collection of decorations for every holiday. She loved her cross-stich work. Every person in the family including spouses, had a special cross stitched stocking and there was a tree that Michael built for her to hang all the stockings on.

This collection included a set of special angel figures that had holiday symbols or months on them. For your birthday you got the angel for your birth month and the birthday angel by your plate and your favorite scratch made cake or pie.

There was also a table that Leon Bottemuller built for her that had a glass top which lifted to hold special items that corresponded to the holiday.

She took up photography when her grandsons were younger and greatly enjoyed it. There are hundreds of photographs from every event we had. We always knew to be prepared to take pictures whenever she was around. Besides taking pictures of the family she truly loved taking pictures at the lake of the birds, the landscape of the house as they worked at remodeling it. She loved documenting the progress they had made.

Her gardens were renowned for the abundance of blooms and variety she cultivated. She hand built a round rock garden bed to hold her irises and daffodils. She also had forsythias, lilacs, and butterfly bushes around the yard. Her green thumb didn’t end at the yard. She also nurtured a Jade tree that was Loval Dyers (her mother-in-law), that we joked about her having a room just for the tree. It waws so large that the last time she had to repot it, it took 2 men to lift it to the new pot.

She loved the times she was able to travel and explore the world. She travel with her Mom and Dad, her friend Marcy, and her husband Michael. She truly enjoyed learning about the history of new areas. The gardens in England and her family history in Germany. I think the best stories came from her trip to New Orleans.

Recently her travels were mainly to their house at the Lake of the Ozarks. She looked forward to her time there and the time spent in the evenings with her friends and a bottle of wine. Michael always had a fire going.

Oak Grove was her home for many years and the home to 2 of the businesses she was a co-owner in. The first was a tire and mechanic shop. The second was the race shop which led to many nights and weekends spent at the racetrack. She made many friends and associated working that business.

Her love of history led her to genealogy research, which fascinated her. She also found that she had relatives that fought in the revolutionary war, which led her to the Daughters of the American Revolution. She became a member and treasurer and very active in the organization. The Lone Jack Historical Society also became a pastime as she became a docent and acting character in their living history presentation. She was proud of her character and her period outfit she was building. Working with the children there was rewarding to her.

She was a lifelong Christian. She attended and was baptized at the Christian Church of Lee’s Summit; with her young family they attended the First Baptist Church of Oak Grove. Then in recent years it was the Community Bible Church in Chapel Hill.

She will leave many people feeling the loss of her presence. She was a daughter, wife, mother, surrogate mother, grandmother, great grandmother, mother-in-law, boss, friend, and associate to so many people. There will be a void that will be felt in many people’s lives.

My sincerest condolences to Stephanie’s family. Husband; Mike, Son; John, Daughter;Shawn. Her grandchildren and their families. I’m thinking and praying for all of you.

We think of you today Mike, and of our long friendship with you and Stephanie. There are no words to express our sincere condolences. Our hearts reach out to each of you today; Mike, Jo, Shawn, John, grandchildren and extended family. May your memories of Stephanie’s love give you comfort in the days ahead. Know we are thinking and praying for your strength and peace.
Our love, Penny and Mitch

The world will miss this lady. There was nothing she would not help with, and never a time that she wouldn’t make time to just sit and laugh and visit.
The lake will never be the same. Ann

I am so sorry for your law. Stephanie was a friend and will be sorely missed for her smile and laugh as she presented her character and our history of Lone Jack to the public and school children. I truly enjoyed working with her on events. She was a special lady.

Our Sincere condolences to Michael, Shawn, John and the rest of the grandchildren and family. Stephanie will truly be missed. God Bless you.
Jeff and Tana Smith

Mrs. D was loved by many and touched the Hearts of Teah and myself we will miss her a lot. Always remember absent from the body is to be present with the Lord . Her life has just begun ! We love you Mrs Dyer !!
Our Prayers during your time of loss !!

We’re so sorry, we’ll definitely miss our good friend and AKA energizer bunny Steohanie❤️Just reading the tribute shows what a busy and true multi taster she was. Gone way too soon, but she sure packed in so much during her lifetime.

Stephanie collected so many things; think Angels, hummingbirds and iris were some of her favorites. Am sure she’s hugging all the angels up there and is so happy up in heaven, especially with her Dad and Aunt Thelma.

I will always remember my good friend and neighbor from Lee’s Summit. The high school love that never had a chance. You are in good hands now my dear friend.

Sending our heartfelt condolences to the entire family.
Stephanie will be missed.

From all us at the Lone Jack Post Office.

Stephanie and I had many good times growing up. Our parents hung together a long time. Jo and CL were good friends. Prayers to Jo and the family. God bless. She was one of a kind.

Our Condolences to the entire family.❤
I think especially of John Dyer though, as I know him best. He always has such glowing things to say about Stephanie, as she had so many talents and skills. Our Condolences John, we’re so sorry that you’ve lost another treasure. I’m sorry for your aching heart, may the Lord comfort you until that day of Great Rejoicing that is coming.