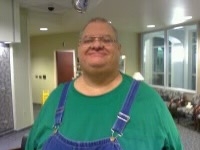 Steven was born at Independence Sanitarium in Independence MO on December 13, 1952. Steven lived in Greenwood for four years. His family moved to Lee’s Summit then moved to Belton, MO. He then returned to Lee’s Summit in 2007. Steven enjoyed canoeing, boating, fishing, bible study and leatherwork. Steven was a graduate a Lee’s Summit High School and Longview Community College with a degree in automotive repair and maintenance.

Steven married his lifelong partner Janet Braun in 1973. They had two children, Jeremy and Melissa.

There will be a graveside ceremony will be held at 2:00 PM, May 14, 2022 at the Greenwood Cemetery, Greenwood MO. In lieu of flowers you can make a donation to the kidney foundation.

So sorry for your loss.

Sorry for your loss. We know he will be missed. Glad his suffering is over and he’s in the Lords home with Janet.