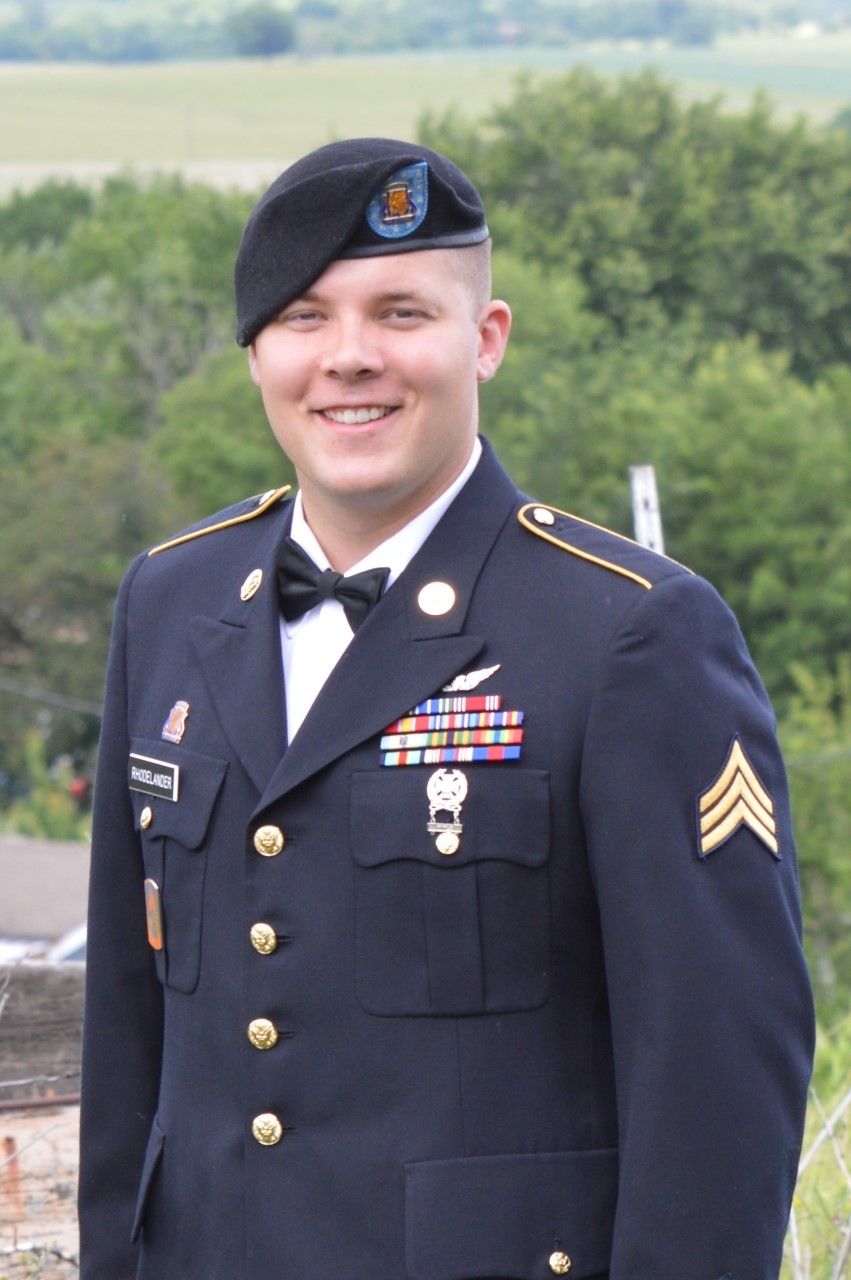 On Tuesday, January 19, 2021, Taylor Rhodelander, loving husband and father of two children, passed away at 28.
Taylor was born on June 23, 1992 in Kansas City, MO. He joined the Missouri National Guard in 2010 and later joined the Army Reserves. Taylor participated in Operation Enduring Freedom as an army soldier. He was currently serving in active reserve as a Sergeant.
On June 7, 2014, he married Rebecca Rhodelander (Woods). Together they had a daughter, Emma, and son, Benjamin.
Taylor had a passion for drumming and was a part of the Manna Fellowship worship team. Taylor enjoyed hunting with family and friends. He was also able to fix anything and was always eager to help others. He was a happy-go-lucky guy and had a contagious smile.
Survivors include his wife Rebecca, two children, Emma (4), Benjamin (1), parents, Mike and Julie, and sister Mikaylah and a large extended family.
A memorial service will be held on Saturday, January 23, 2021 at Manna Fellowship Church on 291 S and 58 hwy at 10:00 with visitation prior at 9:00. Graveside service will be private.
In lieu of flowers the family requests donations be made to Venmo under Taylor Rhodelander Memorial Fund or a check can be made out to Rebecca Rhodelander directly.

I loved Taylor! He was always my favorite friend of Kirk’s. We had so much fun riding down the mountain in Albuquerque NM. He was very patient with me . He will be missed.

Don’t have the words to express how very sorry I am. My prayers are with you all!!!

Taylor was a great friend. He welcomed me into the unit like I have been there the whole time. He was always laughing, smiling, and cracking jokes. I will always remember his infectious happiness.

Rebecca, my heart is so aching for you and your children. I am so sorry. Praise the Lord you have the Lord and your loving family to lean on. You are in my prayers.

Rest In Peace Taylor. The Soldiers of B 935th ASB mourn your loss.

My prayers are with all of Taylors family and long list of friends. He was a very special young man to us all. For me, he was one of my kids, as he chose the name “grandma or granny” for me. Even though he ws not a blood grandson, I claimed him. He is dearly missed and very well remembered in my heart.
Mary Culver ( Rachel Stones mom)

I am so sorry to here of your loss. Taylor and I served together when he was in the Guard at the Warrensburg Armory B Co, 935th. He was a fine young man and a good Soldier. Prayers for you and your family.

I can’t express how sorry I am, my thoughts and prayers are with you all. I will always remember Rhodie as one of the sweetest boys I have ever known. I’ll never forget all our lake trips and fun times at the house. He will be missed.

Rebecca, I am so sorry for the passing of Taylor. He sounds like a very special man, who was much loved. I’m so grateful he was a Christian man who I will meet someday up in glory! I will keep you & your family in my thoughts and prayers. I’m not sure if we’ve met. I’m your mom’s cousin. I live in Independence & if I can be if any help please let me know. Your mom can get in touch. My first husband passed when I was 27. I know the Lord is by your side & your not alone. ?

I’m sad over your loss as a family. Taylor, was such a friendly neighbor he would always smiling.
Prayers to his wife and little children.

Praying for you and your babies ? ❤

Served with him in Kuwait and can never forget my good memories with him, but my favorite memory of him was his ability to make people laugh, joke, and smile during a hard time for all of us. He was always able to put a smile on my face. Forever and always we will never forget. Until Valhalla brother. Rest easy.

Our deepest condolences on your loss. We loved Taylor’s warm smile and caring nature. Let us know if there is anything we can do to help in any way.

I am devastated and shocked. I’ve know Taylor for 20 years and watched him grow up. He worked for me on several projects. He was everything a parent could want in a young man, hard working, respectful, caring, smart, polite, patriotic and more. I followed his career in the service and as a husband and father. He seemed to have found his place in life and in every family picture his smiling face seemed to reflect his happiness.He always had that wonderful smile. Grace and peace to all who are saddened by the loss of Taylor.

My prayers and condolences for your family. It was wonderful to have known Taylor. He will always be that sweet young man with a great smile.

Taylor was a good man and a kind soul. It was an honor to know him. Wishing strength and peace of mind to Rebecca and all of Taylor’s family and friends.

To the family, I send my deepest condolences. I was blessed to have known and worked with Taylor.

I knew SGT Rhodelander mostly from his reputation as a dedicated Soldier and from his infectious smile and motivation when he’d stop to chat with Soldiers outside my office. He was always a pleasure to work with, volunteered for any mission he trusted himself capable to figure out, and is already greatly missed across many Army formations. My prayers to you all!

Our hearts go out to all of Taylor’s family. He was a sweet, likeable young man who will be missed by many. Prayers for healing and grace.

Taylor was an excellent Soldier I had the pleasure of meeting during his successful experience in the Best Warrior Competition at Camp Bullis, TX. He was truly the best warrior. Your Army family is always here if you need anything.