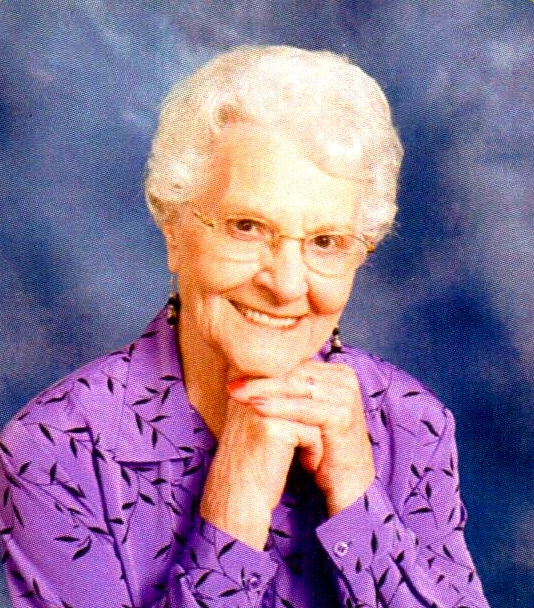 Thelma Grace Peters, 90, passed away on Monday, November, 18, 2019. Thelma was born November 4, 1929, daughter of Fred Winn Reed and Alma Rosa Mewius-Reed. Born and raised in Kansas City, Missouri, she has shared many stories about those days. She remembered the address to each house where she lived. Her parents remodeled the little one bedroom house she lived in prior to getting married, the night before her wedding they had an indoor bath room added, this being the first indoor bathroom she ever had. When it was too hot to sleep in their house, the family would take blankets to Swope Park and sleep outside under the stars. They walked to church, closest to their home, regardless of denomination. They also walked to school , the store, and to the bus stop if they needed to go downtown. While working as a cashier, Thelma met a short, little, red haired guy, and he asked if he could give her a ride home. She married George Robert Peters on May 15, 1949 at the Maywood Baptist Church in Independence, Missouri.

George and Thelma started a family with their oldest daughter Roberta Sue (her spouse Stacy Crider) born 11 months after their wedding. Two years later, a son, George Robert Peters Jr. (1952-2015) (his spouse Linda Kaye French) followed, two years after that, with a daughter, Linda Gayle Peters, two years later, a third daughter, Rhonda Marie (her husband Mike Phillips), and three years later, Russell Norman (his spouse Vickie Moon). Five children were simply a blessing to a woman told she would never have children. In October 1963, George decided he wanted to raise his children in the country. He bought 40 acres south of Belton, Missouri and a 2 bedroom house that did not have a bathroom. They all grew to love the quiet home in the country. The children learned so much about growing up as country kids, sharing, work ethic, and animals. They rode horses, fed the cows, collected eggs, rounded up pigs, and were chased by an old Banty Rooster. Thelma used everything on the farm to provide for her family. She learned to make jelly from grapes, peaches, and gooseberries, as well as pies and cobblers.

Thelma retired from Cotter & Co. in 1990. She and Bob loved to travel.

Thelma was preceded in death by her parents, her husband, and her son George Jr.

She was saved and a member of South Haven Baptist Church. Thelma leaves her 4 children, 10 grandchildren, 14 great grandchildren, her sister Doris Thomas and her spouse Ed, her brother in law Alvin Peters and his spouse Janis, her sister in law Alice Cotton, and many nieces and nephews to celebrate the life she lived.

Thelma was a wonderful sister-in-law! I remember her sweet smile, and wonderful meals at their table. I’ve missed time with her since our journey to the Northwest, but was always warmly received when we returned. She has left a great legacy in her wonderful children, grandchildren, and great-grandchildren! Sending love and hugs!

We wish to share our condolences with the family. Thelma was a wonderful woman who had a smile that lit up her face. She will be missed.

I have wonderful memories of Aunt Thelma as a great cook and hostess when our family of six visited your family of seven on your farm. She was competent and communicative and I’ll not forget the recent family lunch in summer 2018 when we sat together for many minutes and caught up on life. She seemed grateful for each family member and for where she was. You have cared well for her and now she is at peace in the Lord’s arms. May you be comforted as you celebrate her life.

Roberta, Rhonda, Russell, and Linda, and families, your Mom Thelma will be missed by many. We are sorry for your loss and praying for comfort and peace in the coming days for all of you and your wonderful families. We have been blessed having a great sister-in-law like Thelma to share so many years enjoying our times with her and your Dad, my brother Bob.
One of the many fond memories I have was the day of their wedding when Bob borrowed my 1937 Ford to drive on their Honeymoon trip, their car had a problem. All of us brothers always helped each other in many ways and your Mom was always there for us too. Love you all.

Thelma was a wonderful mother and friend. She was loving and generous with her time and attention to family. I will always be grateful for caring for my family when I was ordered to Vietnam for a year. Rest In Peace.

I was privileged to meet Thelma while she was living with Rhonda and Mike. Mike served us lunch and then we all played domino’s. She was an elegant lady with a sharp, witty personality. I had a wonderful afternoon. Rhonda and Mike were loving caring dedicated caregivers that I not only witnessed, but Thelma bragged about. She left this earth in good hands to be welcomed in good hands with our Lord.
RIP Thelma, you will always be remembered by dozens of family and friends.

So sorry for your loss. I really enjoyed visiting with Aunt Thelma when my mom was still at Carnegie Village in Belton, and getting to know her better. She will definitely be missed!

She was a wonderful friend and I loved her as a sister for a few years. Thelma loved to come over across the street where I lived with my husband Dick and he was the one to build her porch. Things now are different. I will miss her, she called us the “Twisted Sisters”. I know how much she loved all of her family too. I am blessed to have her in my life and heart for ever.
Hello Thelma,
Tell Bob and Dick I will be there when my time comes.
Love, Shirley Gregory

Thelma was my great grandmother. I’m so blessed to have known her and spent my childhood around her. I remember our trip to Jekyll Island many years ago. She is loved by so many and will be missed tremendously!

Thelma became a part of our extended family when her daughter Rob married my brother Stacy 27 years ago. It was obvious from the time I met her that she loved her family. The lives of her children are a testament to how they were raised. Thelma was a good lady. Prayers for her beloved family.

She was a wonderful woman! I remember them coming through Cartersville on their way to Florida and we would usually see them sometime during the time they were here. She will be missed. Praying for all of you. Wayne and carolyn

My condolences to the Peters family regarding the loss of your mother. Growing up with the Peters family is a cherished childhood memory. The fine people that all of Thelma’s children grew up to be is a lasting tribute to Thelma.

Russ and family,
Very sorry to hear about your mom. What a blessing to know you will be together again soon in the presence of Jesus! Love, hugs and prayers during this time.

I remember that house in Belton. With the gooseberries right next to the house and all the bullfrogs we tried to catch at the pond. Was a long time ago. I can’t remember seeing Aunt Thelma without a smile. We love you so much Aunt Thelma. Peace is yours. My family and I send our love and prayers to everyone. We love you all.