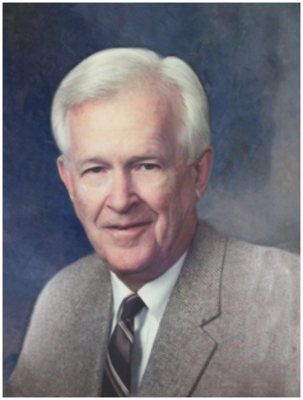 We note with awe the life of Thomas Arthur Nicholas, Jr., of Lee’s Summit, Missouri, who passed away on July 30, 2018. His death at home in John Knox Village marked the end of a long and successful career of service to family, country, and his chosen field of family medicine. Tom was born on October 19, 1923 in Iowa City, Iowa, the son of Thomas A. Nicholas, Sr., and Mary Margaret McKean Nicholas. He grew up in Gillette, Wyoming, where he showed early initiative by earning a nickel a week to blow his trumpet every time the neighboring preacher came to “Hallelujah!” in his sermon. Tom attended Carroll College in Helena, Montana, and the University of Wyoming, where he honed life-long skills in snooker pool and poker. (The bridge obsession came later.) He was cautioned at least once by the dean for spending too much time socializing in the student union. He met his future wife, Betty Ann Craggs, when he picked her picture out of the Idaho Falls High School yearbook as the girl he would most like to take on a date. After that momentous first meeting, Betty told her best friend that Tom was the kind of man she wanted to marry. The rest is history! The couple corresponded during the war, which Tom spent as a celestial navigator, flying with the 329th Squadron in the 93rd Bombardment group, part of Ted’s “Travelling Circus” in the U.S. Eighth Air Force during World War II. They married on August 31, 1947 in Idaho Falls and began their married life in Denver where Tom completed his medical degree at the University of Colorado while Betty worked as a microbiologist in the School of Medicine. They loved the great outdoors in the Rocky Mountains, especially golfing and skiing, treasured longtime pursuits. They settled in Buffalo, Wyoming, where Tom served for 25 years as a family doctor and where they raised their family before eventually moving back to Colorado and Lubbock, Texas to pursue opportunities in academic medicine, including a position at Texas Tech University. The couple moved to Lakewood, Missouri, so that Tom could serve as director of the division of education at the American Academy of Family Physicians. He later accepted an appointment at UMKC School of Medicine. He and Betty made many lifetime friends at Truman Medical Center, where he helped to establish a Family Practice Residency Program. The American Academy of Family Physicians presented Tom with the Thomas W. Johnson Award in 1987 for outstanding contributions to family practice education. Tom and Betty were generous supporters of the Kansas City Symphony and loyal fans of the Chiefs and the Royals. He is lovingly remembered by Betty, his wife of over 7 decades, their 5 children and spouses, 11 grandchildren, including Dr. Thomas Arthur Nicholas IV, 8 great-grandchildren, including Thomas Arthur Nicholas V, who was born on Oct. 19, 2007, exactly 84 years after his greatgrandfather, and many dear neighbors, colleagues, friends, and relatives around the world, who benefited from his advice, kindness, and path-breaking leadership as he roamed the globe. His was the “best life ever,” and that’s a direct quote. Hallelujah! A celebration of Tom’s life is scheduled for Monday, August 6, at 3 p.m. at Woods Chapel United Methodist Church, 4725 NE Lakewood Way, Lee’s Summit, MO, 64064. The family offers sincere gratitude to Kansas City Hospice and Palliative Care, the John Knox Village Helpers, Drs. Mike Silvers and R. Stephen Griffith, and caregivers Jerrie Cameron, Melissa Hamilton, and Cass McCune. In lieu of flowers, please consider a donation to the Nicholas Family Medicine Society, care of the UMKC Foundation.

I am so sorry to hear of Dr. Nicholas’s passing. My heartfelt prayers go out to the family. He was such a blessing to work with for so many years at Truman Medical Center. He will be very missed! Jennie Buckley/Johnson

Joe, I am sorry for the loss of your father. My thoughts are with you. Fred Mayfield

Dear ones. Allison and I are deeply saddened by Uncle Tom’s passing. It seemed as if he might go on forever, and in some sense he will. All of us who had the pleasure of being related to him, who were privileged to have shared our lives with him will keep him in our thoughts until our own passing. He was a man to admire and to emulate. Know that we are thinking of you all as you honor one of the the finest persons to ever walk the Earth. I can still picture him pulling his golf cart. Love Jeff and Allison Craggs

Dr. Tom, I loved that man!
He believed in me when there was not much to believe in. He accepted me into his residency program and accepted me into his family when he knew little of me. He took a risk on me and because he believed in me, others believed in me. I never would have accomplished what I have done in Family Medicine if it were not for Dr. Tom with his undying guidance, encouragement and mentorship. An incredible mentor who gave me a love for people, patients and family medicine who exuded humility, transparency and was truly real. Over the past 30 years he was always interested in what I was doing and cheered me on…I will miss sharing my life with him and the encouragement he gave me. Thank you Dr. Tom, I am who I am, greatly because of who you were and the powerful impact you had on my life.
John Hill