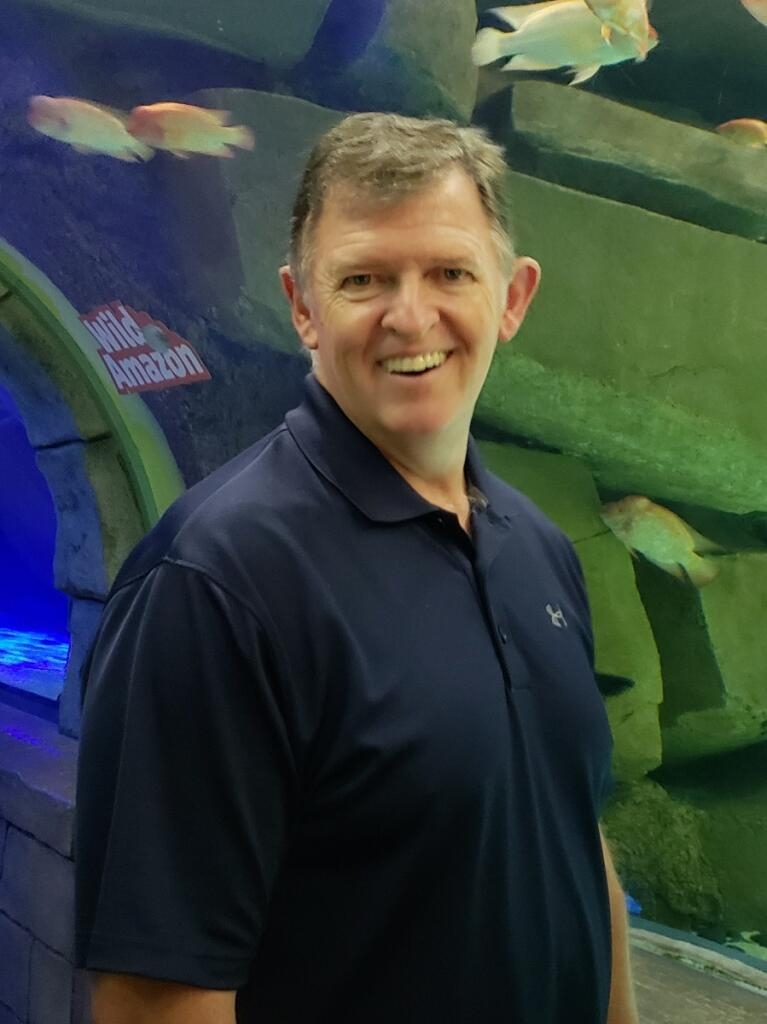 Pro golfer/baseball coach and physical therapist Tim Bray’s love of life and others didn’t come to an end with his death. Surrounded by loved ones, Tim joined the heavenly congregation on Saturday, June 26, 2021, at 59, after a courageous battle with cancer.

He graduated from Lone Jack High School in 1980 after being recognized for his overall awesomeness by being presented with the Mule Pride Award. Following his high school graduation, his career led to a position at Marion Merrell Dow for many years. Upon departure from Marion, he pursued his education to fulfill his dream of becoming a physical therapist. He achieved that dream in the spring of 2000 when he crossed the stage at Rockhurst University with his diploma in hand. Dr. Tim, as his coworkers affectionately called him, went on to be the most exceptional physical therapist Truman Medical Center will ever know. Tim loved his job and his patients.

Tim was an entrepreneur with several rental properties. He was hardworking, honest, and generous when it came to his tenants, as he was with most people he came into contact with; filling a stranger’s gas tank while filling his own was a familiar gesture for Tim.

Tim married the love of his life, Yudi Bray, on July 6, 2012. Their happiness in marriage was unmatched. It continues to provide an example that many admire and make an effort to imitate.

Tim was preceded in death by his father, Tom Bray, his brothers, Robbie and Rusty Bray, and his granddaughter Zoe Holden.

Tim was a great friend to many, a loving husband, father, grandfather, brother, and uncle. To know Timmy was to be loved. Heaven must have needed our hero.

The Bray Family is in my thoughts and prayers. Mr.Bray was my landlord for 8yrs, no matter what the problem might be that your having in your place Mr. Bray will always be there to fix it with a smile on his face and joy in his heart. Mr. Bray was a one of a kind person that can never be replaced. You will be missed by many here on earth.

My condolences and prayers to Uni and family. Tim was like my big brother to me and kind caring man. Tim was a unique man Every month I would send him a quick text and it was always a blessing and a treasure to hear from Tim. You will be so missed Tim

Our thoughts and prayers goes to the family.

I send my condolences to family. May Our Lord and Savior wrapped His loving arms around you with His love.

I am so sorry, he always had a smile on his face, i will be thinking of you and your family, you are so lucky for the good and bad times. he is always looking down.

So sorry for your loss Lori and family.In my thoughts and prayers.

Though I met Tim only fleetingly on a couple of occasions together with his brothers Bill and Pat, I KNEW him through my friend, his little brother, Mike. If family pride counts for anything, damn near everything in my book, the love Mike and his brothers share for one another is remarkable. Regrettably rare but SO very cherishable, as was Tim in his -all too short- life here. Tim, your goodness…in fact your very soul lives on in your brothers, your family and those countless others you have touched. I pray for your family’s strength and resilience. As to you, whom I knew too briefly, ENJOY his kingdom. You certainly deserve that everlasting love.
-Peace.

i loved you very much sweetheart. you were the best person that i have ever known. you were so kind giving and careing . . love you.

Tim was a great friend, He was always ready to lend a helping hand to those in need. His Love of life led him to many adventures of which he was successful in all. He was always smiling and a happy man condolences to his family. The Bray family have been friends for many many years.Tim was a young man just out of high school when he came to work At Marion Labatories. His first wife Sherre, Crystal, and TJ know you father is in HEAVEN You will see him again.Yudi Tim LOVED you with all his HEART you are a blessed woman. know you will see him in HEAVEN. Tim will be missed by many.

With deepest sympathy in the loss of Tim Bray. Praying that his journey from this world to the next was peaceful knowing Jesus would take his hand at the moment of death. Prayers for his family’s hearts be comforted by knowing Tim is with Jesus and surrounded with your love.

To my little brother who I looked up to and admired my whole life. I cherish the memories and good times but most of all your inspiration and helping transition to the civilian way of life. Your wisdom and strong character will forever be embodied in my mind. Your love and faith in God is an inspiration for all who knew you to follow. Now you are at peace with our lord and savior. I love you brother.

To Lori Bray and Family:
Only those lucky enough to have a brother can understand the bond and the pain of losing them. My heart aches for your loss and I wish I could take away the pain. I did not have the honor of knowing Timothy but I know I missed out on knowing a great man because of how highly you spoke of him. In those moments of silence when you think of him try to remember that it is at those times he is with you. My sympathy and deepest condolences go out to you and your family.

We would like to extend our deepest sympathies to the family and friends of Timothy. The depths of your pain cannot be comprehended and words can’t always provide the comfort needed. Life is so precious and death is such a thief. Try to remember love is a bond that death cannot take. He may be gone from this physical life but he will always be in your heart.

Sharing in your earthly sorrow but rejoicing in heaven’s gain. Our thoughts and prayers are with you.

Tim was a wonderful person, and a great therapist. I saw him as a co-worker and as a patient and respected him very much. He will be missed very much.
My condolences to the family

Many of us in the ER were shocked to have learned of the news. We send our condolences to the family. He was a great asset to the TMC Family and known by many here. He will truly be missed.

Tim was my landlord for 10yrs. He was the most kindest, sweetest person…the best landlord I ever had. He will truly be missed. My condolences to his family.

Tim was my physical therapist.He always encouraged you to keep doing more because he wanted you to get better. He was a nice person. So sorry to hear of his passing. His family and friends is in my thoughts and prayers. Tim will be missed.

Tim is a very special person. I met him during physical therapy while I was recovering from rotator cuff surgery (he was my therapist). I used to tease him about how much pain he inflicted upon me. Truthfully though Tim had a special, healing, touch. I miss him, but something I learned about Tim was that he loved His Lord and his family with all of his heart. We spent a lot of time talking about those things, and through the process developed a special friendship. Today Tim is in great shape, he’s in heaven with our loving God. So as sad as we all feel that he is not here, someday we’ll be together again. See you soon my friend.

Mike and I send our most sincere condolences to all of the Bray family. We just loved Tim. He could light up a room with his personality. It was a joy to know him. We are keeping your family in prayer. Mike and Sherrie Herrick

I am so sorry to hear about your loss. I have thought about Tim a lot lately, but did not realize what he was going through. When I first me him, he was my physical therapist. Tim immediately became much more than that, and he made a permanent impact on my life, as I am sure he did with all of his patients. He will be dearly missed, but Heaven just got better, and will soon be whipped into shape!

Tim will be in our hearts forever.

Tim was an amazing person and therapist.
I was lucky to to not only work with him, but see him as a patient as well.
He will definitely be missed.
Sending thoughts and prayers.

Tim Bray will long be remembered as a dedicated PT student and respected clinician by those of us who had the privilege of knowing him at Rockhurst University and who knew the quality of care he provided to his patients. Sincerest thoughts and condolences to Tim’s family and friends.

A great man and a good friend.
He always wanted me to give him strokes when we played, he played with my golf group and they all thought the world of Tim and enjoyed getting to know him.
Miss you Tim

We were lucky enough to work with Tim and got a chance to see what a great man he was. We will miss him dearly and wanted to extend our sympathies to you and the family.

Timmy, I miss you so so much. You were the most amazing, kind, generous, nonjudgemental person I have ever known. You never skipped a beat when it came to helping someone. You moved mountains and you touched so many lives. I will never ever stop missing you. The impact you left in my life will not be forgotten. It was you that encouraged me to be a nurse. I will always be grateful to you for that conversation. I know you were very proud of me as I am you. I love and miss you so very much my sweet sweet brother.
Lori

Tim was a great man, friend and co worker. I actually had the opportunity to work with Tim for a few years at TMC. Tim was someone you could go to if you needed to talk. He would lift you up when you were down. He always had a smile and encouraging words. I know his patients loved him dearly. He would tell them to push harder and get better so they could get back to life, work or activities. All
Of his co workers admired his intelligence and knowledge. He was truly a very loving and caring Physical Therapist. I send my condolences to his family.

Tim shared a life fully lived. Meeting him, right off, I could tell his heart was full of love for others. He adored his wife, Yudi, and his family. He made you feel like you have known him a long time. Tim we will miss you, but see you again in heaven. Prayers and hugs to Yudi and family. “Much grief for those you loved much. Much joy for memories shared.” Remembering some of the last words you spoke to me. The smiles and joy you spread to Dale and I, will always be remembered.

My condolences to the bray family… I am truly sorry for your loss, and his battle..