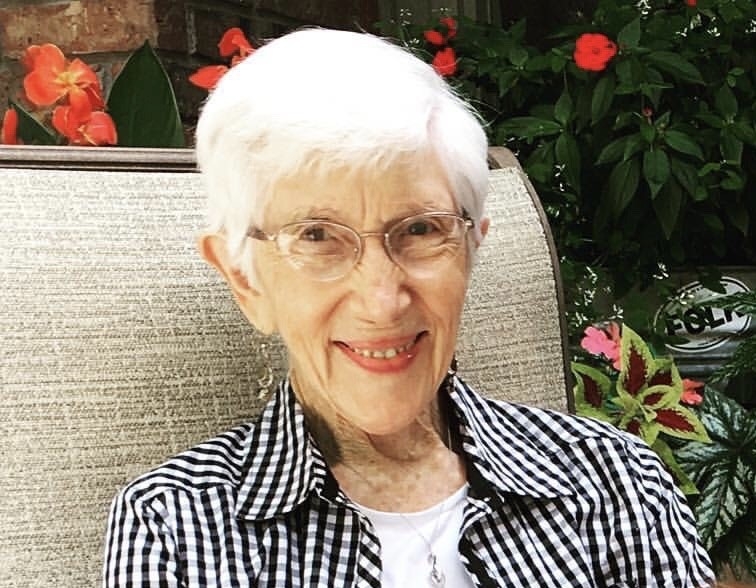 Se was the older child born to Frederick and Allene Herrmann in Eagle, Nebraska on February 23, 1931.

Peggy, as she has always been known to friends and family, graduated as the class valedictorian from Alvo High School in 1948. She completed the secretarial program at the National Business Institute in Lincoln, Nebraska in 1949. She became engaged to Orlin Reimer, they married on February 16, 1950, then moved into a small house in Palmyra, NE. By the end of the year, this young couple welcomed their first child, Don. Their Daughter, Chris, was born in 1955. They stayed in Palmyra until 1963, when they began a series of six moves over the years following Orlin’s career with Northern Natural Gas Company. Along the way, Peggy worked for Ministers’ Life Insurance Company in Minneapolis, and State Farm Insurance Company in Lincoln.

Once they were empty-nesters, Peggy was able to learn and enjoy the game of golf. For many years she and Orlin enjoyed traveling and golfing with friends in each location they lived. They were always active members of the Lutheran church in each city and especially enjoyed singing in the choir. Orlin and Peg retired to Bella Vista, AR in 1987 and remained there for 26 years.

In 2013, they moved to Lee’s Summit MO to be closer to family. She was preceded in death by her husband Orlin, brother Bud Herrmann, and sister-in-law Phyllis Reimer. She is survived by son Don (and Joyce) Reimer of Bellevue, NE, daughter Chris (and Larry) McMullen of Blue Springs, MO, seven grandchildren and spouses, 17 great-grandchildren, sister Lauretta(and Dwight) Taylor, sister-in-law Elizabeth Herrmann, brother-in-law Richard Reimer and sister-in-law Marlene Byrne. She also leaves behind numerous friends from every place they lived.

Her current church home, Martin Luther Lutheran Church in Lee’s Summit, was an integral part of her last years. Memorial contributions may be made to the church at 1200 SW Blue Parkway, Lee’s Summit, MO 64063. A family service will be scheduled at a later date.

I didn’t get to know Peggy well, but I know her granddaughter Abby well, and I know Abby gets a lot of her strength and ambition from her beloved grandmother. Her legacy will live on in the lives of the loved ones she touched so deeply. Sending love to the family that will so deeply miss her presence. I only hope she has been reunited with her one and only love Orlin.

To all the family,
My most sincere condolences go out to you all! I hope the memories you share of Peg and Orlin and the times you spent together will provide some comfort to all of you. The times I met both of them were always such joyful occasions and they were both also so positive and welcoming. Their spirit lives in all of you. I know you will share that spirit together.

I read the obit in the Omaha World Herald and her name “Peggy” made me know right away who it was. I have thought about your mom and dad many times over the years and remember all the good times our parents had together. I am so very sorry to hear about your loss. It is so hard to lose them.

Peg was one of the first persons I met and connected with when we moved to JKV. She became a very special friend. She was a fine lady. We enjoyed remembering things from our younger days and enjoyed a good laugh. She will certainly be missed by many. May you find peace and comfort in the days to come.

I was so sorry to hear of Peg’s passing. We enjoyed spending time with Peg and Dutch after their move to Lee’s Summit, and enjoyed going out to eat with them. After Dutch’s passing, we continued to go out with Peg and share a meal and a bottle of wine. We will treasure those memories and the stories we shared. Our condolences to the family.

Peg was a dear friend and a wonderful person. She was always positive and friendly and a joy to be around. We will miss her greatly, just as we miss Dutch.

We were surprised she had passed, since Pat had recently walked with her.

So sadden by the news that Peg had left us. She was so vibrant and also positive. So glad that she chose our church to be with- we will miss her!

Really enjoyed Peg and Orlins friendship at United Lutheran Church in Bella Vista, Ar
Always so very friendly. She took charge of our little garden area at the church. She was so devoted. So very sorry for your loss. We were all so sorry when they moved away.

So sorry to hear of your loss. They were such good ambassadors for United in Bella Vista. Have nice memories of Peggy.
George & Glenda Heist