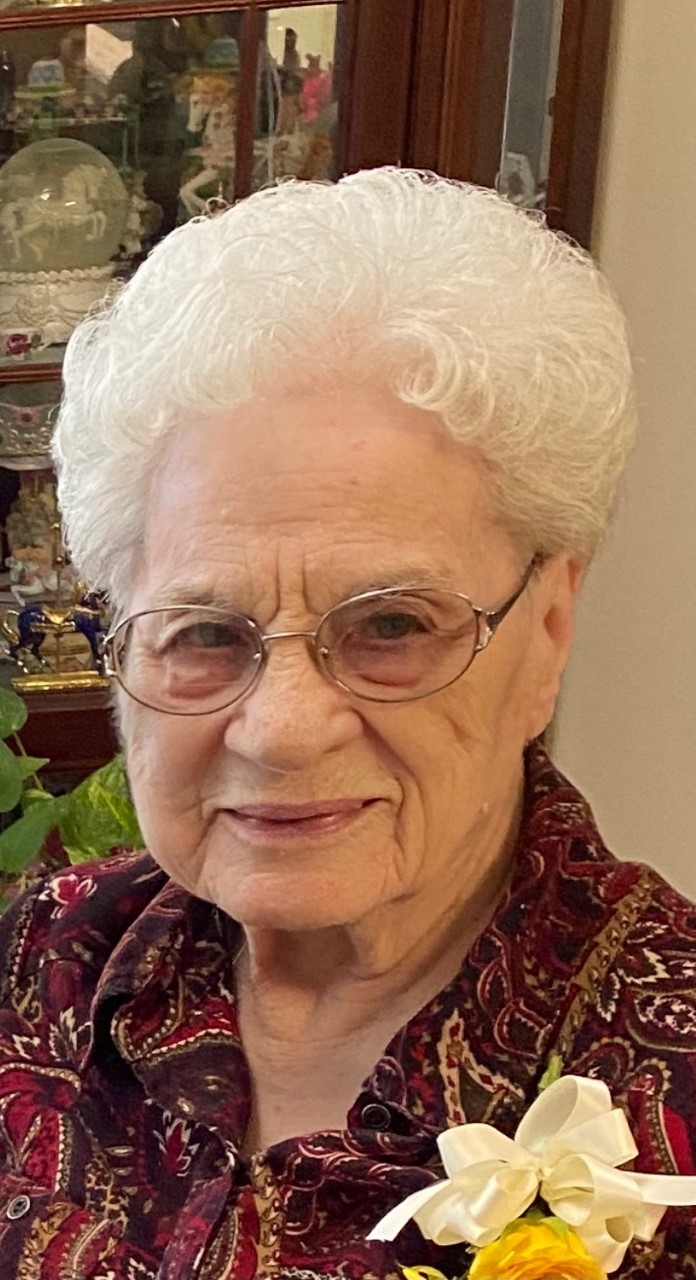 Virginia Rose (McPheeters) Decker was born in Baldwin, Kansas, November 18, 1925.  She moved to Missouri at the age of 10, and graduated from Blue Springs High School.  Virginia married Percy Decker, March 10, 1946, in Lee’s Summit.  They were married 67 years.  They both lived and worked around the Lee’s Summit area.  As a teenager, Virginia worked for the Gas Company before becoming a full-time homemaker and mother.

Virginia and Percy were involved in various activities with their children.  They were members of the Lee’s Summit Saddle Club, Prairie Lee 4-H and Greenwood Hustlers 4-H Clubs, along with the Future Farmers of America.

Virginia loved to sew, embroider and quilt.  She enjoyed making a quilt for all 3 of her children, 6 grandchildren and 9 great grandchildren.  In addition, she quilted for others to lead to a total of 30 quilts.

She was her grandchildren’s biggest cheerleader by attending sporting events, musicals and livestock shows.  Often times, she could be found behind the camera or videoing all their events.  She even loved supporting her great grandchildren at their ball games and watching the little ones while their parents were at work.

Virginia returned to work for the U.S. Government (GSA) for 31 years.  After retiring, she worked as a teller for the Union/Preferred Bank in Lee’s Summit.  After 12 years, she retired a second time to care for her husband.

After moving to John Knox, she became involved in card games and playing bingo.  She loved telling about her quarters she won in her bingo games.  Every Christmas, the family enjoyed gathering together in Grandma’s room and then playing pool and bowling.

Funeral will be held at Langsford Funeral Home in Lee’s Summit on Wednesday, July 13 at 10:00. Visitation will be Tuesday, July 12th from 5:00-7:00 at the funeral home.  In lieu of flowers, memorial contributions to the American Breast Cancer Foundation.

I didn’t know your mom but she sounds like a wonderful lady. She certainly lived a full life. I know she’ll be missed. Hugs

Aunt Jenny was always my favorite aunt. Going to her house in summer was so much fun. If it was hot upstairs, Aunt Jenny would make pallets on the screened-in porch and let us all sleep out there, where it was cool.
One of my favorite memories was when I’d just heard from one of my older cousins that Santa wasn’t real. I ran into her house to ask if that were true. I’ve never forgotten her answer; she said, “You know God is real, but he is a spirit. You know that Jesus is real, even though he is a spirit. Santa is a spirit, but he is as real as he can be “ She was always that kind and that supportive.

We were so sorry 😢 to hear that your Mom passed away, Pam. You and your family are in our thoughts and prayers 🙏 at this difficult time.

I’m so sorry for the loss of Aunt Virginia.

I have very fond memories of summer gatherings on the farm with the home made vanilla ice cream and of course her famous fruit salad with REAL whipped cream.

I wish I was there today to be with everyone.
Sincerely,
Cousin Carol Sue