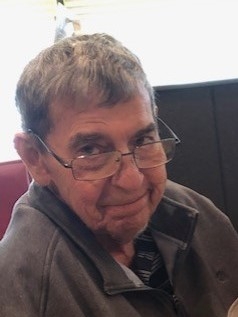 Wally was a 1951 graduate of Lexington High School in Lexington, MO.  He continued his education at St. John’s College in Winfield, Kansas.  After graduating from college, he joined the U.S. Army where he spent one year in Korea followed by one year in Tokyo.  Returning home in 1956, he enrolled in an electronic school and then went to work for The Bendix Corporation.  He spent his last 30 years working for GSA.

While working at Bendix he met his future wife, Connie Steinbach.  They were blessed with two children – Mike Schlueter (Leigh Anne) of Lee’s Summit and Kimberly White (Mike) of Belton).

Wally was deeply committed to the Lord.   He enjoyed his weekly bible study and the fellowship he received from the others attending.   He also enjoyed handing our religious pamphlets to the Lee’s Summit Fire Departments and to fellow residents at John Knox Village.

In his earlier years, Wally thoroughly enjoyed playing basketball and baseball in the Lexington/Kansas City area.  One of his favorite memories was playing against the Harlem Globetrotters when they visited the Kansas City.  Wally also enjoyed gardening.  He would leave boxes of fresh vegetables outside the back door of the church on Sunday morning and anyone could take whatever they wanted after the service.

He is survived by his two children, and older brother, Duane Paul Schlueter (Elsie) of Jefferson City, Mo.

Memorial contributions can be made to St. Matthew Lutheran Church.

I am deeply saddened to hear about Walter’s passing but incredibly joyous that he is in a better place.
I had the privilege of transporting Walter to dialysis over the past year and got to know (and joke) with him on a personal level. He was a very kind man and I always enjoyed hearing his stories. He will be greatly missed but never forgotten. Prayers and Best Wishes to His Family and Friends. God Bless You. – Walt’s buddy, Andy

Was so sorry to learn of Wally’s passing. I worked with Wally at GSA for many years. Enjoyed visiting with him and many moments of laughter. He always shared his gardening with us. He always went home empty handed.
Rest in peace

There is nothing I can say except how sorry I am. My prayer for you is peace and comfort during your time of grief. I’ve known Wally for so long. Started at work and continued through our retirement years. Remember going by the house and visiting with Connie and picking up tomatoes that Wally had for me. They loved their schnauzers. Cheryl and I use to meet from time to time to catch up the world and have a few laughs. Many times he would bring us pamphlets from his church, tomatoes and questions about his computer. Anyone that knew Wally, knew electronics was not his forte. Ha. At the end of the meal he would leave with a bowl of soup for Connie. I will miss him all his funny ways. Rest In Peace.