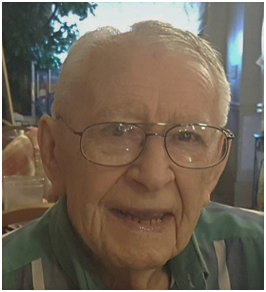 Wesley “Ferrell” Shuck, 86, of Lee’s Summit, MO, passed away on December 17, 2018 at home from complications of Parkinson’s Disease with his loving wife, Janice (Ruda) Shuck, by his side.  For the last 61 years, Ferrell often referred to Janice as his bride. He leaves three daughters and a son; Beverly Shuck of Lee’s Summit MO; Greg Shuck of Raytown, MO; Cindy (Kurt) Heier of Fenton MI and Julie (Eric) Doane of Lee’s Summit MO. He also leaves his grandchildren; Truman Shuck, Aaron Cawlfield, Jefferson Shuck, Audrey Shaffer, Erica (Thomas) Grossman, Abigail Doane and Blake Heier along with many extended family members and friends.

Ferrell began his career as a newspaper boy, delivering the Omaha World Herald in McCook, NE during 1946 and 1947. He graduated from McCook High School and McCook Junior College, while working for the McCook Daily Gazette. He met and married the love of his life, Janice Ruda, in 1957. In 1958 he became the National Advertising Manager for the Miles City Daily Star in Miles City, MT. He returned to the Midwest in 1959 to work in the Advertising Department of the Omaha World Herald. Ferrell moved his family to Missouri in 1965 to become the Publisher of the Lee’s Summit Journal which he held until 2000.

Ferrell received the Merrill Chilcote Award for his exemplary service to journalism in Northwest Missouri and was inducted into the Missouri Press Hall of Fame in addition to receiving numerous other newspaper awards. Ferrell was instrumental in starting Lee’s Summit’s Cole Younger Days and served as the first Marshall, which was held in conjunction with the 100th anniversary of the Lee’s Summit Journal in 1981. Ferrell has been recognized in downtown Lee’s Summit with a bench outside the Whistle Stop Coffee and Mercantile in honor of his decades of community service and storytelling. Ferrell was also known to voice his opinions while playing pool and has been recognized with a soapbox inside the Do Drop Inn.

A visitation, which will begin with the rosary, will be held from 4 to 7 p.m. on Wednesday, December 26 at the Langsford Funeral Home, 115 SW 3rd Street, Lee’s Summit. A Funeral mass will be held at 10 a.m. on Thursday, December 27 at Our Lady of the Presentation Catholic Church, 130 NW Murray Rd, Lee’s Summit. Burial will follow at the Historic Lee’s Summit Cemetery. The family encourages all attending to wear red to honor Ferrell’s love for the Nebraska Huskers and suggests donations to the Lee’s Summit Social Services, Lee’s Summit Historical Society or the Parkinson’s Foundation in lieu of flowers.

Ferrell was a great husband, father, friend and member of the community who will be missed by many but none more than by his family.

Fly with the Angels Ferrell, Love and Prayers to your loving Family.

I was one of his night caregivers and I so enjoyed working with him.
His smile and his pranks will be remembered.
I know you enjoyed my Songs.
Rest in peace.

May you find comfort and peace in your many wonderful and beautiful memories. May they bring a smile to your face and warm your heart. With deepest sympathy! Our prayers are with all of you!

I worked with Ferrell at the McCook Gazette for several years. He was always pleasant and frequently funny. He was also excellent in his job in the advertising dept.

My heart goes out to all of you. Julie, your Dad was such a nice man. Prayers for all of you. May the good memories carry you through the rough times.

This year’s Christmas card from the Shucks had a picture of Ferrell at a baseball museum, an appropriate setting for someone who loved sports and was named after a major league pitcher.
Ferrell addressed a debilitating affliction with courage and determination, characteristics which aided him through a successful career, distinguished with honor.
Ferrell was a family man of faith and principles. I can imagine that he had a positive influence over many readers of his newspaper.
I am proud that he was my cousin.

Janice,
So sorry to hear of Ferrell’s passing. You have sweet memories from so many years together you can hold close to your heart. Keeping you and your family in my thoughts and prayers.
Debbie Eads

I was Ferrell’s overnight caregiver Mondays, Wednesdays and Saturdays. Ms Jamaica #2 , that’s how he’d remember me. He was one of my best clienrs. I certainly miss him, and will remember him always with a smile.
May his soul rest in peace. I also want to speak a word of comfort to Janice and his children: Be comforted, he is at rest.

We were sorry to hear of your loss. We know you have many happy memories of him. We will keep your family in our thoughts and prayers.