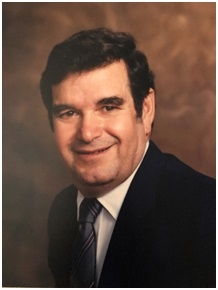 Bill Harper, 89, died Saturday June 22, with his loving family by his side.

Bill was born October 6, 1929 in Ft. Thomas, Kentucky to Owen and Althea Harper.  Bill grew up on a farm in Central Illinois near Assumption.  He would ultimately end up with 6 brothers, Owen, Glenn, Jim, Don, Larry, and Eddie, a stepsister Sue Reynolds, a stepbrother Larry Shatas, and a half-brother Chuck Harper.  Bill and some of his brothers helped run the farm until he met his lifelong sweetheart, Louella May Wood, who resided on a farm south of Pana in Oconee.

Prior to his marriage to Louella on November 30, 1952, Bill was drafted into the US Army on April 2, 1951.  He was a frontline medic valiantly serving in the Korean War.  Bill was honored with a Bronze Star and Purple Heart during his enlistment which ended upon his honorable discharge, January 2nd, 1953.

After separating from the Army, Bill and Louella married and moved near his father and stepmother, Alice, in Grandview, Missouri.

Bill’s occupation after serving in the military was with Bendix Corporation for the next 30 years.  He enjoyed working there and made many friends.  While working at Bendix, Bill and Louella purchased a hobby farm in Kingsville, MO, near Holden where they raised several crops and livestock (beef cattle).

Graveside memorial services will be held on Monday, July 1st, at 10:00am at Floral Hills East Memorial Gardens Cemetery in Lee’s Summit, MO with Langsford Funeral Home in coordination.

Our deepest sympathy to Bills family as well as our love to Louella and the family. Bill was a wonderful brother and we will forever have him in our hearts. He was always so proud of his vegetable garden and loved the outdoors.

Our deepest sympathy to Louella and the family. Bill was a wonderful brother and we will forever have him in our hearts. He was always so proud of his vegetable garden and loved the outdoors. He talked about his travels, cooked and loved to share his cookies.

Bill was a wonderful and kind man. A good brother-in-law and friend. Our prayers are with the family as they bid him farewell for now.

Reflecting over the past few days I have many fond memories of Uncle Bill. His laugh, his love of gardening and fighting the squirrels eating his tomatoes and the best cinnamon rolls and chocolate chip and macaroon cookies. Bill was not one to sit around-he was busy doing something. I remember, and own, several of his woodworking projects. Even though I didn’t get to see him often, Uncle Bill has always had a special place in my heart. My prayers of comfort for the family during this time.