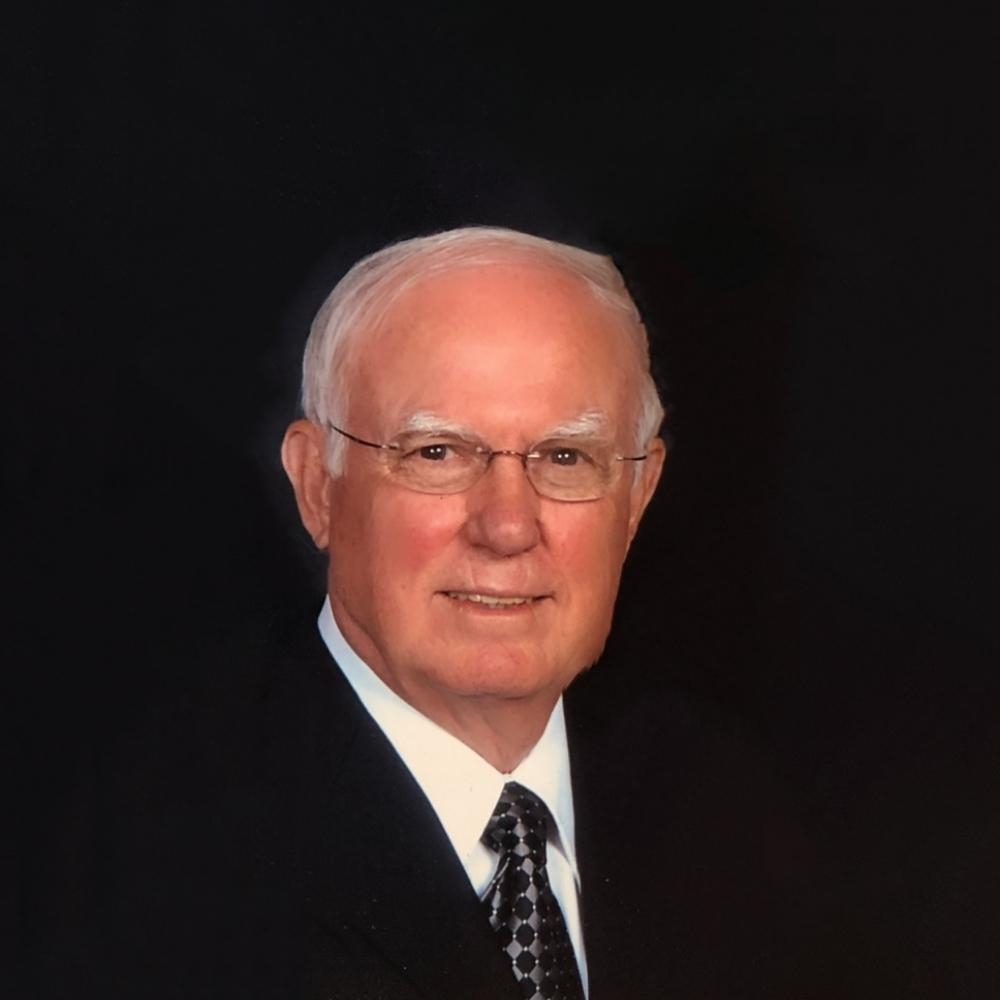 William (Bill) was born August 16th, 1929 in Gallatin Missouri. He grew up in the rural community of Hamilton Missouri, graduated from Hamilton High School, received a bachelor’s degree from Northeast Missouri State Teachers College in Kirkville and a master’s degree from Central Missouri State University in Warrensburg. In 1950 he wed Mary Margaret Swaithes and they were married for 68 years until her death in 2018.

Bill and Mary were a team. They took their first teaching positions in Mendon Missouri in 1951. A year later, he answered the call into service for the United States Air Force taking them to California and Texas. After leaving the military, they resumed their careers in education first in their hometown of Hamilton and then in Grandview Missouri where they raised their 3 children and contributed to the community for the next 40 years.

At a time when the city of Grandview was experiencing phenomenal growth, they were privileged to be involved in helping to shape the growth and development of the Grandview Public School system. For his first 11 years at the high school, Bill was a teacher, assistant principal and head football coach compiling a 77-20-3 career record including 10 winning seasons. It was especially rewarding for him to see many athletes translate their athletic discipline, excellence and leadership into college scholarships, expanded career opportunities and successful careers. For the next 21 years, Bill served as the Grandview High School Principal where he was surrounded by a dedicated team of innovative and gifted administrators, teachers, counselors and support staff.

William McCrary was named Missouri Journalism Administrator of the Year by the Missouri Interscholastic Press Association at the University of Missouri twice – in 1977 and 1986. He was recognized for providing outstanding service to high school journalism by helping to build a strong program, standing up for student press freedom and providing out of the ordinary support and encouragement for the program and its students.

In 2016, William McCrary was selected to be in the inaugural group of inductees into the Grandview High School Athletic Hall of Fame.

Bill was a positive role model providing inspiration, encouragement and a smile to all who knew him. He valued relationships above all else. If success can be measured by the number of lives touched for the better, he had a very successful life.

Julia: Sorry about the loss of your father . He was a wonderful man in every way. Besides administration and coach, he taught me driver’s ed during which we talked.football most of the time 🙂 I’m sure he will be greatly missed by you and your family . All the best. Mark

My condolences to the family. A large part of my childhood was spent in the presence of this Man. I admired him and his ability to relate to all kids no matter what age. Prayers for strength during this difficult time. He made a lasting impact on many of us.

Mr McCrary
God bless you for all you did for your students. You were a role model, an inspiration and a good man.

I am not able to find the words that would show the appreciation and love I had for Coach McCrary. He taught me so many life lessons during one on one meetings he held with me. These times were to teach me how to correctly call plays during a football game but ended being life development conferences. What he taught me, I carried with me the rest of my life. I think they made me a much better person and definitely a better leader. God bless you Coach and Rest In Peace

I want to express my sincere sympathy to the McCrary family. “Coach” was a great inspiration to all the students and athletes at Grandview High. I was a student there from 1960-64 during the heyday of the football program that Coach built. What a time that was! Coach McCrary was highly respected within Kansas City and state of Missouri. Even as my class aged, he returned to our class reunions and shared old times with us. He led a great life. May he rest in peace.

My condolences go out to the entire McCrary family.
Both Mr. And Mrs. McCrary made profound marks in my life. They were stellar icons in our lives growing up.

Awesome man and coach. Even though I wasn’t in sports he knew me spoke to me all the time.

thank you for all you did for me, playing football for with you set the tone for my entire life. May you rest in peace.

Mr. McCrary was my high school principal so many years ago. He was a kind and caring man, and made a difference to so many people. A life well lived. Sincere condolences to his family.

Keith Tempel asked me to pass on his condolences and remind the family that he loved working beside Bill at GHS and considered him a great friend!

We send our deepest condolences to the family. As 1966 graduates of Grandview high school we were privileged to be blessed by Bill’s leadership and example.

I am sorry for your loss. I remember Coach from my freshman Civics class. During my senior year, Coach and our gym teacher took a week off curriculum and Coach and boys gym class taught the girls football. He told us. “If your cheering ‘we have a first and ten let’s do it again’ you need to understand what that means.” I already liked football but his lessons made me a life long fan of the game. I am sure your and the family will miss his love and guidance.

Sending prayers to your family. My mom, Betty Teevan, worked in the GHS office with your Dad for many years. We just lost her Nov. 2, 2021. God bless.

Mr. McCrary was a kind Principal. Praying for comfort for all.
GHS ’71

Bill was a terrific high school principal who I greatly admired. I was privileged to work with during the later part of his career. A man in integrity who could be counted on as you needed him.

I knew his wife as well . They were a real team!

What a wonderful teacher and principal. We always have a smile for everyone and even when I went back to substitute always had a fun smile and a joke to a former student. I admired him greatly

Jane, Sending warm thoughts to you and family,your Father was one of the greats that made such an impression on many young people. Take comfort in knowing he made a huge impression on Grandview at his time. Xo Linda Zorn Shrader.

Jane, my heart aches for you and your family. Your dad was a great man, my memories of him are fond, and I always had great respect for him. Prayers lifted as you grieve his passing.
Rene’ (Angell) Kroll

What a beautiful tribute to a wonderful principal! We were both fortunate to have dads who were principals. I had forgotten he was a coach also. That was quite a record! I wish I could be more eloquent but I just wanted you to know that I have the most profound respect for your dad and I will remember him fondly always.
With love,
Kim

McCrary family, my deepest sympathies for your tremendous loss. Mr McCrary was a very much loved and well respected man at GHS and the community. I had the pleasure of having Mrs McCrary as my teacher in Home-Ec at the Junior High where my Dad, Mr Horner was Principal. My graduating class was the class of 1971.

Mr. McCrary was a wonderful man, setting a beautiful example of grace and integrity at Grandview High School. I appreciated knowing him as my sister-in-law’s father in later years. He was always the kindest, sweetest gentleman.

Bill was one of the great ones. As a young guy just out of Missouri J School, I worked at the KC Statr and I covered Grandview High football games. Bill and I had a good rapport and I spoke at one of his football dinners. Center kids “hated” me because of what they perceived prejudiced stories in favor of the Bulldogs. I still recall stories that included Worley and Blankenship and so many others. I just want to say it was my pleasure having known Bill, if only for a brief time as I moved hither and yon in the newspaper business. Nothing but fond memories.

My first teaching job was with Mr. McCrary as principal at GHS. I was hired mid-summer as history, and family living, teacher, along with being dance team sponsor. Thanks to Mr. McCrary I was given a great start to a 35 yr career as an educator. I may have received my education degree at KU, but it was with Mr. McCrary that I learned to be a professional educator. His confidence in me allowed me to pursue my master’s in counseling and serve as a school counselor for 27 years. And always so classy!

Mr. McCrary was such a kind principal and a wonderful person. I was fortunate to get to see him and Mary later in life as we go to the same Church. They were such a sweet special couple. I look forward to a nice celebration in the summer and have many happy memories of Mr. McCrary.

A remarkable boss, an exceptional human being and absolutely the father I never had. I literally owe everything to him and he will forever be in my heart. My thoughts are with his wonderful family. Take peace in knowing Mary and “Grant” are together again. What a wonderful class act couple!

Jane, Julia, Mark–My sympathy for the loss of your Dad. I enjoyed working with him for many years at Grandview high school. He will be missed by many friends and colleagues. Kaye Morris

Sorry for your loss, prayers for the family.

Mr. McCrary was an icon in our community along with his wife Mary.
It is sad as we, ourselves, age and we watch the people we love and will remember the most pass on from our lives.
Jane, my condolences to you and your family. Your Dad and Mom were very important people in my life growing up. I will always remember them.