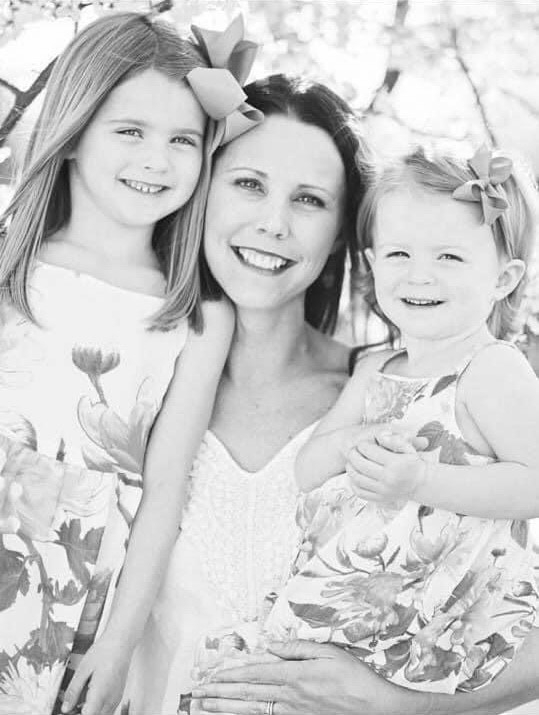 Wylie Drury Brown, of Greenwood, Missouri, cherished wife, mother, and daughter, passed away September 24, 2022, at the age of 40, after a courageous battle with metastatic breast cancer. Wylie was born November 6, 1981, in Clinton, Missouri, to parents John Drury and Roseanne Drury. Wylie had an idyllic childhood in her beloved hometown of Clinton, filled with family, friends, dancing, cheering on the Clinton Cardinals, being active with the Clinton United Methodist Church, and helping her community through various school, civic, and church organizations; she made her parents proud every day.

After graduating from Clinton High School in 2000, Wylie attended the University of Missouri, where she made lifelong friends as a member of Pi Beta Phi and proudly cheered on the Tigers; she graduated in 2004 with a degree in Secondary Education/Business and Marketing. Following her graduation from Mizzou, Wylie began teaching at Lee’s Summit North High School. As a business and marketing teacher, as well as DECA advisor, Wylie had the honor of sharing her knowledge and enthusiasm with hundreds of students throughout her career, many of which she remained friends with long after they graduated. In furtherance of her love of teaching, Wylie also earned a master’s degree in Curriculum and Instruction from the University of Central Missouri.

Wylie fell in love with her future husband and constant strength, Bryan Brown, while attending Clinton High School. Wylie and Bryan married on June 9, 2007, and were blessed with two beautiful daughters, Halle and Elise, who had the benefit of seeing their mom live a life filled with love, hope, and faith. Wylie made Greenwood and Lee’s Summit her adopted hometowns, where she attended The Summit Church, spent time volunteering, being active in her girls’ activities, and spreading positivity to all who were lucky enough to know her. People knew Wylie for many things, including her love of family trips to North Captiva Island, her encyclopedic knowledge of everyone’s birthdays, and being the most genuine friend that anyone could ask for.

In addition to Bryan, Halle, and Elise, Wylie is survived by her dad John Drury and his wife Ann (Clinton); her mom Roseanne Drury (Clinton); her brother Blaik Wirsig and his wife Cindy (Clinton); her grandmother Gwen Drury (Poplar Bluff, Missouri); as well as nieces, nephews, cousins, and aunts, who all adored her; and countless friends, who Wylie was always thinking about, no matter what she was going through. Wylie was preceded in death by her maternal grandparents, Fred and Christine Hills; her paternal grandfather, Paul V. Drury, Jr.; her cousin, Laurel McBride; her uncle, Richard McBride; her aunt, Mary Frances Drury; and her great aunt, Willomae Drury.

Over the last few years, Wylie was known for invoking the phrase “Be still and know,” a reference to Psalm 46:10, and certainly words she would want all her loved ones to remember during this difficult time.

So sorry for your lost such a wonderful young lady.

John and family, I’m so sorry to hear about your loss. I will keep you and your family in our prayers.

Our prayers are with you and the girls.

My thoughts and prayers are with you all!

So sad and sorry to hear of Wylie’s passing. My prayers and thoughts are with you all. Again so sorry Roseanne and John, just remember as I have learned after losing a son, you have to take one second at a time.. The hurt never leaves, but just keep talking about the wonderful life she had and laugh often of all the funny things she said or did.. My heart breaks for you all. Pam Winkler

You will be in my heart forever. I love you Wylie ❤️❤️❤️

Our hearts our breaking with losing our sweet girl, Dru. We will make sure your wishes are carried out, help raise the girls and support Bryan at all times. I will miss and love you forever.

Wylie was a colleague and good friend to our daughter, Lauren. Lauren routinely spoke of Wylie and loved teaching with her and deeply valued her friendship with Wylie. Wylie was a once in a lifetime educator, wife, mother and friend. She truly made Lee’s Summit North and, in fact, the world a better place. Sending prayers for the family and many many friends. God Bless and God Speed. There is a new angel in Heaven!

I can’t believe how courageous this girl was. Always brave and going forward. Heaven definitely gained an angel and this earth could have used a few like her.
My heart goes out to her husband and girls.

This lady here was a true gift from God. Everyone she met was blessed by meeting a pure loving soul. Wylie you will be missed my dear. Prayers for your family for strength in this time.

Wylie was like a big sister to me .. I am the little sis of Mary Delano one of her very best friends … The impact this woman made on so may lives with carry through those of us that were lucky enough to know her esp her beautiful girls and amazing husband .. I am always praying for her loved ones and now heaven gained another angel we can all call one .. sending all the love

I never had the opportunity to meet Wylie but I can clearly see she was a wonderful lady. John and Ann you along with the entire family are in my prayers. Much love❤️❤️

Wylie was such an inspiration to all. What a beautiful soul! Sending prayers of comfort to all of you.

So very sorry for your loss❤️‍🩹

So sad for your loss. We will continue to lift you up🙏

I will miss the sparkle of Wylie Drury Brown. From her enthusiasm during student teaching to her amazing dedication to ALL students she taught, she was a blessing to have at LSN and in the LSR-7 district. I know she LOVED her celebration of LIFE tonight. Thoughts and prayers for Bryan, Halle and Elise and her family. Keeping you all in my thoughts and prayers.

To the Brown girls: I knew your mom when she was your age—she was kind and compassionate even then. You had an incredible mom, and I’m sure you carry on pieces of her. ❤️
I am praying for you all.

Bryan,
We are so incredibly sorry for your loss of Wylie. She was such a kind hearted, sweet, and caring person. I know she instilled that in your girls and they will carry that with them forever.

After we lost our baby Anna someone told us, “life here on earth is so short compared to the eternity that we will spend with our loved ones in heaven, for those who believe.” Those words brought a little comfort. I hope they do for you too.

All our love,
Bryan and Kelsey Himes

I just heard and I am so saddened you are gone. Prayers to your family. Thank you for touching my life and will see you again one fine day in heaven. ❤️

I was so sorry to hear of Wylie’s passing. She was such a courageous young lady and a friend to everyone. She was kindhearted and caring. She inspired many with her fight to stay alive. Her daughters and husband were her biggest cheerleaders. Prayers for her family. Heaven gained a very special angel.

Sweet angel you will be missed. I remember you were always so sweet to everyone you met!